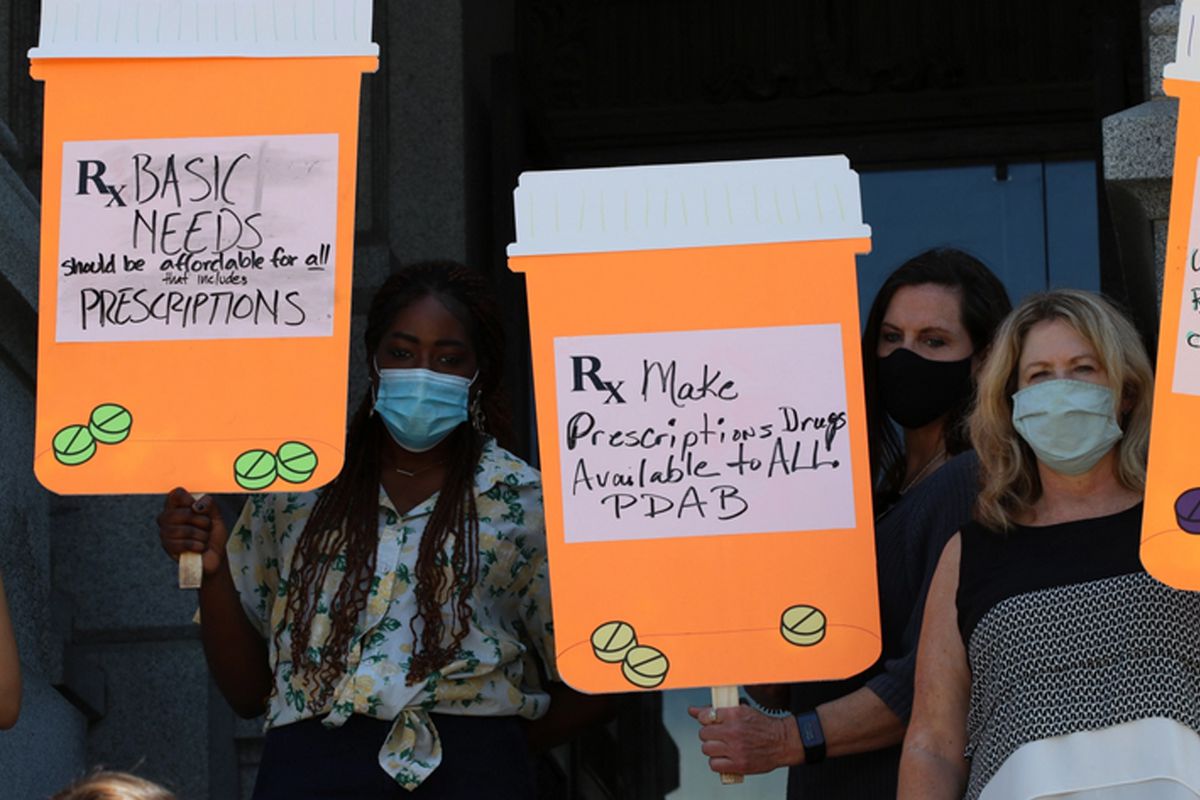 Supporters of Colorado legislation to create a prescription drug affordability board rally on the steps of the state Capitol in Denver. The bill, backed by Democratic Gov. Jared Polis, has passed the Colorado Senate and is making its way through the House.Markian Hawryluk / KHN

DENVER — Tired of waiting for federal action to reduce prescription drug costs, Colorado is acting on its own — even if it must do so with one arm figuratively tied behind its back.

Unable to set prices or change patent protections, the state is exploring legislative and administrative approaches to cut out-of-pocket costs on medications.

None of the efforts alone would result in broad-based, deep cuts. Still, state officials estimate the combined impact of the measures could save Coloradans 20% to 40% in out-of-pocket costs.

“That’s why it’s so important to have a variety of levers,” said Kim Bimestefer, executive director of the Colorado Department of Health Care Policy & Financing. “You start stacking all these up, and it’s remarkable how much we can drive down the cost.”

Like many states, Colorado — which spends more than $1 billion annually on drug purchases — has been looking to lower drug prices

One bill would create a prescription drug affordability board, which could review prices of medications sold to consumers and set payment limits. The legislation, backed by Democratic Gov. Jared Polis, has passed the Colorado Senate and is making its way through the House. The board’s job would be to ensure that those savings are passed on to consumers.

Drugs would qualify for an affordability review under various triggers, including when prices increase by more than 10% a year or exceed either $30,000 a year for brand-name drugs or $100 a month per person for generics. Patients and consumer advocates also could nominate drugs for review.

State officials estimate those categories probably cover 100 to 125 medications, but the board would be permitted to set limits for only 12 drugs a year. It could review affordability of more drugs and make recommendations for other types of administrative or legislative action to lower costs.

“It is inherently limited,” said Isabel Cruz, a policy manager with the nonprofit Colorado Consumer Health Initiative. “That’s the political reality that we had to accept.”

The bill is intended to help people like Koen Lichtenbelt, 18, of Ridgeway, Colorado, who was diagnosed with a rare autoinflammatory disease when she was in kindergarten. The condition damaged his nerves. In December, doctors prescribed the drug Hizentra, with an out-of-pocket cost of $10,000 a month. His parents footed the bill for three months before their insurance plan agreed to cover it.

Once on the medication, Koen, who’d been missing half of his school days for years, was able to graduate this year. He’s been accepted to Colorado State University but is taking a gap year to work as a first-responder at a fire department. Had he not had access to the drug, Lichtenbelt said, her son would likely need to rely on state aid.

“There is a need for pharmaceutical companies to continue to develop medications and drugs to improve people’s lives,” she said. “However, what is the price point at which there is access to actually being able to use those drugs?”

Beside opposition from hospital and pharmacy groups, the pharmaceutical industry is throwing its weight against the bill, threatening that, in Colorado, it won’t sell the drugs facing payment limits.

“Creating a board of unelected bureaucrats with the authority to arbitrarily decide what medicines are worth and what medicines patients can get would be a disaster for patients,” said Hannah Loiacono of the national Pharmaceutical Research and Manufacturers of America.

“If passed, this bill will create unpredictability for the startups and development-stage companies in Colorado’s life sciences ecosystem, making it harder for them to raise funds,” said Jennifer Jones Paton, the group’s president and CEO. “Investors will look elsewhere.”

Still, the bill is expected to pass. Proponents said it’s unlikely a manufacturer could carve out specific drugs or states from its supply chain and noted that drug companies already sell their highest-cost drugs at lower prices to Medicaid, community clinics and charity hospitals.

On July 1, the governor’s office is launching a tool embedded in electronic medical records allowing doctors and other prescribers to see what patients with public or private health plans would pay for a medication. Bimestefer said 80% of prescribers in Colorado have the tool enabled, and 37% are using it ahead of the official start date.

The state also is pursuing contracts with drug companies linking prices to the effectiveness of the drugs, measured, for example, by whether they reduce hospitalizations.

The Colorado legislature previously approved importing drugs from Canada for consumers to purchase at lower costs. Now, with federal approval, the state is reviewing bids from contractors to make that happen, estimating Canadian imports would reduce costs for 50 common drugs by 63%.

But the state found that importing drugs from Australia and France could save 78% to 84%. Colorado would need an adjustment to federal law to import from those countries.

“If we open up other countries, we could increase the supply of the drugs coming in,” Bimestefer said. “This will actually help us battle pharma if we can turn on the spigot full, full, full throttle.”

Colorado’s efforts are part of a national trend, said Megan Olsen, a principal in the policy practice at Avalere, a Washington, D.C., healthcare consulting firm.

According to the National Academy for State Health Policy, nearly every state is considering some prescription drug cost bill this year. There are 14 prescription drug affordability board bills, 24 foreign drug importation bills and 58 bills addressing prescription drug coupons or cost-sharing. And, following a December Supreme Court ruling allowing states to regulate pharmacy benefit managers — the companies that control drug prices paid by insurance companies, states are considering 97 such measures.

Trish Riley, executive director of the academy, said states serve as 50 health policy laboratories, experimenting with policies that can set precedent for other states, prove the viability of various approaches and put pressure on the federal government to act. Some national policies, such as the Children’s Health Insurance Program, started as state measures.

“We’re on the front lines,” Bimestefer said. “And we can see some of the solutions more readily.”