Air ambulances are a wonderful advent of technology. They sooth the worries of every parent who has a kid that hikes in the mountains or travels abroad, and they save the lives of elders who need immediate attention and pregnant women with complications, to name just a few affected groups. That being said, they are usually the only method of transportation available in certain situations and can be extremely expensive – so much so that your travel altitude might not be that far off from the number on your final bill.

Air ambulances are just like ground ambulances – staffed with medical professionals and equipped with the appropriate equipment – except that they can fly to areas that ground ambulances can’t easily reach in a timely fashion. According to the Association of Air Medical Services, air ambulances treat over 550,000 people in the US per year and the demand for services continues to increase, with the number of dedicated air ambulances doubling from 2002 to 2008, and presumably still growing.

While 550,000 people treated per year isn’t a tiny number, this does seem like a relatively niche subject, no? Why should we focus on this type of transport so specifically? Because air ambulances are one of the best and most extreme examples of surprise billing out there, leaving patients with debilitating bills that were unavoidable for them. A surprise bill is one that is unexpectedly high, or not expected at all. For more background on surprise bills, check out 9News’ video explainer.

The bill for a trip in an air ambulance can be very large – trips average between $12,000 and $25,000 per flight, but depending on many factors including the length of the trip and the medical staff needed on board, the transport could go up to a six-figure cost. One of the main issues with air ambulances, and ground ambulances for that matter, is that many of these providers are reportedly not affiliated with any facilities or insurance carriers. If the ambulances were to be under contract with carriers, there would be previously negotiated rates, as with other services, but since there is no affiliation, air ambulances are usually an out-of-network service. So if the insurance carrier and the air ambulance provider disagree on what an appropriate cost for the service is, the patient could end up receiving an extremely high surprise bill. Further, a Federal law entitled “The Airline Deregulation Act of 1978” (ADA) prohibits states from regulating the cost of services, which has stifled many pieces of legislation that states have brought forth to try to control these extremely high costs. 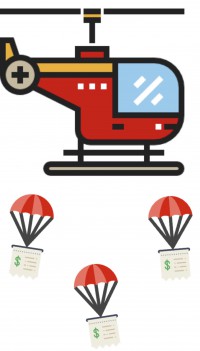 The National Association of Insurance Commissioners (NAIC) came out with a Consumer Alert, advising consumers to check with their insurance to see what air ambulance treatment is covered, and that there is the possibility to purchase extra air ambulance coverage if they feel that it’s a necessity for their family. While this is good advice – it never hurts to check ahead of time with your insurance carrier – we believe emergency services should not end up costing you all of your savings.

Senator Jon Tester of Montana attempted to take on this issue at the federal level with S. 471, “Isla Rose Life Flight Act”, introduced in February 2017. As mentioned earlier, the ADA prohibits states from regulating the cost of air ambulance services. This bill would make it so that the prohibition provisions in the ADA would not apply to state law, local law, and regulation regarding network participation, reimbursement and balance billing. North Dakota and Montana are two states that have also attempted to take on the issue at the state level. North Dakota has been successful through both legislation and regulation. This year, North Dakota passed Senate Bill 2231, which regulates how insurers pay for the services and requires hospitals to notify patients in non-emergency situations which air ambulance providers have a contractual agreement with the patient’s health insurance company. Insurance regulators in the state also developed a consumer guide that shows which air ambulance companies have contracts with the state’s three major health insurers; this information must be distributed to patients in non-emergency transfer situations. In addition, a new regulatory provision that takes effect January 1, 2018 requires non-participating air ambulance services to charge only the average of what participating services charge. Montana attempted to tackle the issue from a couple of different angles, as well – imposing a tax on air ambulances that charge above the allowable Medicare cost for providers that have no network contracts (failed); requiring that air ambulance memberships be regulated as insurance products (passed); requiring insurers and air ambulance companies to resolve price disputes through mediation or the courts, with patients only having to pay applicable co-payment, co-insurance, and deductible costs (passed); and protecting patients’ credit reports from specific unpaid bills (passed).

We know that many of you will probably – and hopefully – go through life without ever interacting with one of these high-flying medical facilities. But as extreme and out there as the air ambulance situation may seem, it is a perfect example of how surprise billing, no matter how great or small, can affect a consumer. If you have ever experienced an instance of surprise billing, whether in the air or on the ground, feel free to reach out to us and share your story. Stemming surprise billing and the effect it has on consumers is one of CCHI’s priorities this legislative session, and we’re confident that it’s a reality, not just us having our heads up in the clouds.

For another interesting take on emergency transportation, check out the Washington Post’s recent article on the expense of ground ambulances and how surprising those bills can be.