Why the Fiscal Cliff Matters for Health Care in Colorado

We are all getting tired of hearing about the “fiscal cliff.” Probably even more so for our Congressional delegation.  But the deal Congress and the President come up with could impact what we all pay for our health care, and who gets to have health coverage.

So what is this fiscal cliff? It’s the end of this year when a bunch of cuts and tax increases are set to take effect to reduce the federal budget by $503 billion.  Congress and the President agreed to the deal last year when the US was reaching the debt ceiling. To get a deal to increase the debt ceiling (and prevent another recession) the Congress gave themselves more time by creating the “fiscal cliff” to guarantee general budget cuts if they could not come to an agreement on specific cuts.  So here we are – reaching the end date (January 1, 2013) and no deal.  But don’t worry – the dealing is definitely going on.  And we worry what any deal could mean for health care in Colorado. 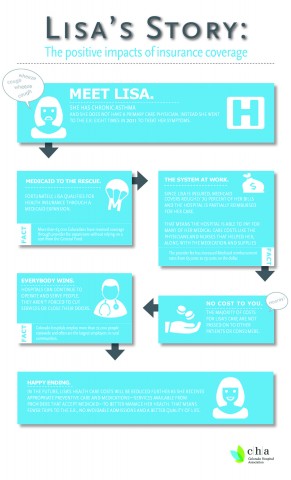 To get to a compromise before the fiscal cliff goes into effect Congressional members are furiously recommending where cuts can be made.  One such place suggested by more conservative members of Congress is our public health programs – those that provide coverage like Medicaid and Medicare. Should we hit the fiscal cliff as planned though, the Medicaid program is excluded because of its important role as a safety-net health care program for the country’s most vulnerable. But some members of Congress want to put Medicaid back on the table.  And Medicare, which is a vital source of coverage for America’s seniors, already has cuts in the fiscal cliff plan and more cuts are being considered in negotiations to avoid it.

But cutting Medicaid or Medicare would not really be a good deal for us taxpayers.  It’s merely a shifting of how we will all pay for our health care system.  And it could result in less Coloradans having health coverage. 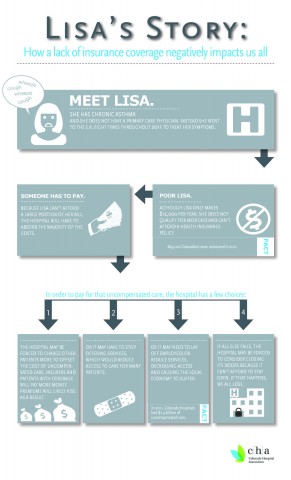 For example if the negotiations result in increasing the age people become eligible for Medicare from 65 to 67 years – where will those seniors get their coverage and how will they afford it? Most have not saved to pay for health insurance after 65 – they thought they would get Medicare.  And most of their employers are not prepared to offer it (if they are still working).  So we will all pay for them.  According to Kaiser Family Foundation if this idea was put in place by 2014, it would result in $5.7 billion in net federal savings, but $11.4 billion in higher health care costs to individuals, employers and states.

Another idea being discussed by some in Congress is to cut funding for Medicaid. We are very concerned about the possibility of cuts or changes to this safety net.  Medicaid helps Colorado cover the costs of caring for nearly 600,000 of our most vulnerable and their health care needs. It is estimated Medicaid provides approximately one-third of revenue at public hospitals nationally, and it is the largest payer for community health centers.  These resources are invaluable in supporting thousands of Colorado jobs, as well as providing health care to those who need it.

On a final note, the Congress is considering cutting an important funding mechanism for Colorado’s new Medicaid program, known as the hospital provider fee. This fee on hospitals is being used by our state to expand public safety-net programs for people with disabilities, mental health issues, and more.  Since its passage and implementation in 2009 it has helped 66,000 uninsured Coloradans get health coverage. This fee also has the potential of helping 200,000 more Coloradans get the health care they need by helping Colorado cover the costs of implementing the Affordable Care Act’s Medicaid expansion. We do not want the Congress to eliminate this important option for Colorado to move forward on reforming and improving access to health care. The Colorado Consumer Health Initiative signed on to this letter to ask our delegation to protect the hospital provider fee.

We at CCHI hope our Congressional delegation understands the importance of protecting access to health care as they negotiate the budget. Keeping Americans covered will benefit our economies – both at home and nationwide. Health coverage means healthier employees and communities.  It means less debt and bankruptcies and ER use.

Americans understand this.  That is why the polls show Americans support public health coverage like Medicaid and Medicare. Our seniors, people with disabilities and working families deserve access to services that they pay for.

Congress, please do not cut the programs that can truly help America recover its economic health, and keep the doors open to all Americans to get the care they need, when they need it.