The CHAS is Out, Health Insurance is In: Colorados Uninsured Rate Plummets to 6.7 percent

Colorado’s new uninsured rate of 6.7 percent is the top level finding from Colorado Health Institute’s Colorado Health Access Survey (CHAS), released today.  The CHAS is Colorado’s most reliable source of information on health insurance coverage, access to health care, and use of health care services. The CHAS is conducted once every two years, with the last CHAS results coming out in 2013.  Because most major provisions of the Affordable Care Act were implemented in 2014, the 2015 CHAS gives us the first comprehensive look at the impact of the health care reform in Colorado. Beyond the new uninsured rate, here are some other key findings of the 2015 CHAS:

Coloradans aren’t finding it much harder to get care. Many of the Affordable Care Act’s critics had predicted that Colorado would be unable to provide health care to the influx of newly insured Coloradans. For now, this prediction has largely been proved false. In 2015, 18.7 percent of patients can’t get an appointment as soon as they need one, up slightly from 15 percent in 2013. Considering the fact that roughly 388,000 Coloradans got newly covered in the last two years, we should be pleased that Colorado’s health care system was able to manage the influx of patients.

Colorado’s decision to expand Medicaid resulted in higher enrollment than many had predicted. The decision to expand Medicaid eligibility made nearly all Coloradans at or below 138 percent of the federal poverty level (FPL) eligible for Medicaid. This expansion greatly contributed to Colorado cutting its uninsured rate to a record low. Since the last CHAS, the percentage of Coloradans covered by Medicaid has nearly doubled, from 11.6 percent in 2013 to nearly 20 percent today.

Many “young invincibles” are getting covered, but some remain elusive. In order to keep everyone’s premiums down, young and healthy consumers need to sign up for health insurance to offset the cost of caring for older and sicker enrollees. The 2015 CHAS shows us that Colorado was relatively successful in getting individuals aged 19 to 29—known as “young invincibles”—to sign up for health insurance. In the last two years, the uninsured rate among Colorado’s young invisibles was cut by over half, from 25.6 percent in 2013 to 12.9 percent in 2015. Worth noting is that young invincibles no longer have the highest uninsured rates among age groups—30 to 39-year-olds now hold that title.

In addition to these largely positive findings, the 2015 CHAS also highlights some areas where Colorado can do better:

Cost of care remains a concern for Coloradans. The percentage of Coloradans who didn’t see a doctor because they couldn’t afford it, declined only slightly, from 12.3 percent in 2013 to 10.4 percent in 2015. In addition, among Coloradans who remain uninsured, 82.2 percent say they lack coverage because it costs too much. As in past years, cost continues to be the primary barrier to care among uninsured Coloradans.

Underinsurance is on the rise. Underinsurance refers to those who are covered, but who have medical costs that exceed 10 percent of their annual income. In 2015, 16.4 percent of Coloradans are underinsured, up from 13.9 percent in 2013.  While Colorado has been tremendously successful in cutting its uninsured rate, Colorado’s rising underinsured rate reminds us that access to coverage is insufficient if that coverage remains unaffordable.

Among the uninsured, some still believe they cannot get health insurance because of their pre-existing condition. This finding should come as quite a surprise to anyone who has been paying attention to the health care reform debate, as the Affordable Care Act prohibits insurance companies from denying coverage or charging higher rates based on pre-existing conditions. However, among the uninsured, 8.7 percent claim that they cannot get coverage because of a pre-existing condition. What this tells us is that some uninsured Coloradans remain largely uninformed when it comes to health insurance. This inference is certainly in line with some of the CHAS’s other findings on Colorado’s uninsured: 14 percent don’t know how to get coverage, and of that 14 percent, 60 percent don’t know where to get information about health insurance.

While the 2015 CHAS certainly shows room for improvement, the primary takeaway is this: health care reform is working in Colorado. By cutting its uninsured rate to 6.7 percent, Colorado has become one of the nation’s leaders in covering its residents. In addition, Colorado’s success should speak volumes to states that have not yet expanded Medicaid, as we now know for certain that Colorado’s Medicaid expansion played a critical role in bringing its uninsured rate to a record low. Ultimately, the fight to get all Coloradans affordable, high quality, and equitable health care is not over—but the CHAS shows us that we are on our way. 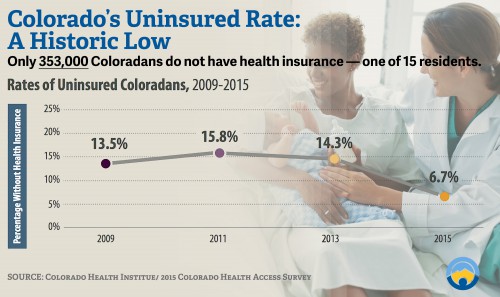 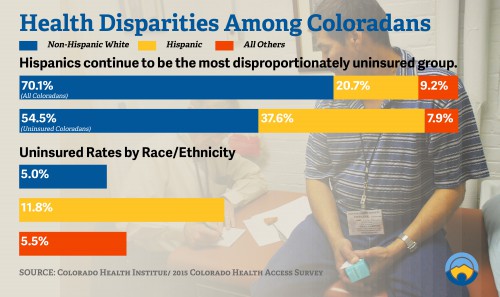