Rejection Sucks, Especially When Its By a Doctors Office 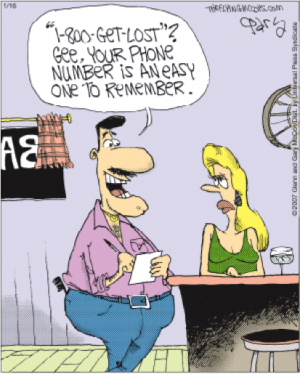 Ever gotten someone’s number at a bar and then stared at the cocktail napkin all week, deciding how soon is “too soon” to call them? And then when you finally gather the courage to make the call, it turns out they gave you the number for a Pizza Hut in Nebraska? Even if you haven’t been there exactly, you can probably imagine that getting burned by a romantic interest is no fun. Now imagine going through that same situation with your health care. Bear with me here.

Picture you’re using your carrier’s provider directory. You look for the phone number of a provider that meets your criteria and you anticipate that when you call that number, you’ll reach that doctor – just like you anticipate reaching the woman from the bar with a mutual love of foreign cheese. If you don’t in fact reach the doctor for whom you were looking, this is a problem with inaccurate information. And while the woman from the bar doesn’t owe you a correct phone number, your insurance carriers certainly do.

Let’s backtrack. Remember our study on the accuracy of provider directories in psychiatry from last year? We’ve gone and done it again, this time looking at pediatricians and family medicine providers in select areas of the state. In order to form the lists of providers we called, we used pulled directories straight from the carriers websites and used search criteria including that they were accepting new patients and part of on-Exchange plans. With this study, we were 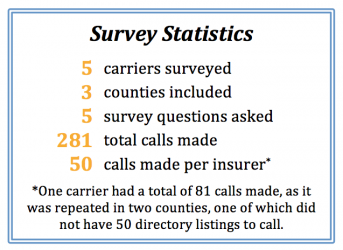 aiming to assess the accuracy of the information that consumers are given and the adequacy of the carriers’ networks. To do this we asked five main questions – if the phone number was correct, if the physical address was correct, if the doctor still took the insurance in question, if the doctor was accepting new patients, and if so when the next available appointment would be. We also asked if the doctor accepted Medicaid or CHP+ to get a sense of the availability of providers accepting public insurance in the area.

With this study, we were aiming to assess the accuracy of the information that consumers are given and the adequacy of the carriers’ networks.

While none of the directories were completely accurate, the data that stood out had to do with whether the phone number was correct and if the doctor was accepting new patients – the elements that would most affect consumers being able to make an appointment and receive care. There were significant inaccuracies in terms of calling the correct office – between 24% and 62% of the phone numbers we called led us to someone or something other than the intended doctor’s office. For example, we called a number that should have been answered by a member of a pediatrician’s office and instead was the front desk at a Holiday Inn. Yea, that happened.

…between 24% and 62% of the phone numbers we called led us to someone or something other than the intended doctor’s office.

Now, if you manage to get through to a correctly listed doctor’s office, the next hurdle is seeing if they’re accepting new patients. We only called providers that were listed on the directory as “accepting new patients,” but as we found out, that tool was not so accurate. There was significant variability in terms of whether providers were accepting new patients. On the one hand, for the providers we called, Rocky Mountain Health Plan’s list was correct 91% of the time –they are definitely heading in the right direction! The flip side of that statistic is the carrier on the other extreme, United Healthcare, with an accuracy rate of only 29%. Calling one of these numbers would be like if your barroom Cinderella’s phone number was right, but she told you she was married or uninterested – major bummer.

For the most part, the physical address listings were pretty accurate, as well as the rates of correct insurance acceptance. Now, if we could just translate the success in these categories to the more vital information.

…Rocky Mountain Health Plan’s list was correct 91% of the time…on the other extreme, United Health Care, [had] an accuracy rate of only 29%.

The reason consumer groups like CCHI are concerned about inaccuracies in provider directories is not just that calling multiple numbers to try to find an available provider is discouraging and a barrier for consumers. A consumer could have purchased a plan because a specific doctor he or she wanted to see was in that network – imagine calling a month after your coverage begins, just to find out that the provider’s number is wrong or that they now won’t accept you as a new patient. A deeper concern is that these inaccuracies may reflect an inadequate network. If doctors are no longer practicing or reachable, or aren’t accepting new patients, the network seems bigger than it is. In addition, several providers were listed as pediatricians or family medicine doctors, but were actually practicing a different specialty. These are all reasons why provider directory accuracy is important.

Throughout the Division of Insurance’s (DOI) regulatory process to update their network adequacy regulations, CCHI has advocated for consumers by pushing requirements for more frequent updates of these directories, including a method for consumers to report inaccuracies that they encounter to carriers, but there’s still work to do. As consumers, we need to be aware and double check information that we find in these directories. And if you’ve relied on provider directory information that turned out to be incorrect, contact the DOI to see if something can be done to help. Because while it’s rough getting rejected by someone you meet over a beer, it could be detrimental to your health care to be given the wrong information in a provider directory.

For more details of our study, check out this infographic and if you’ve had an experience with a provider directory affecting your health care, share your story with us! Want this data to be even more accessible and shareable? Look out for a video blog coming soon on CCHI’s provider directory study and share it with your partners and constituents!