It’s that time of year again when health insurance companies submit proposed rates to the Colorado Division of Insurance, which has the authority ensure they are not excessive, inadequate, or discriminatory. We expect the DOI to verify that no insurer is taking advantage of consumer in their proposed rates, and that each insurance rate is clearly justified based on demonstrated costs from 2016.

Today Colorado’s Division of Insurance released the initial rate filings for 2017, and yes, insurers have filed to increase their rates. Before we get too far, it’s important to note that the numbers that follow are average changes to rates across a carrier’s offerings of plans, not each plan that they offer. More analysis of the individual plans in the rate filings will be needed to get a better picture of what the market looks like for consumers. Overall, the proposed rates show both challenges for keeping coverage affordable and opportunities in Colorado as a new insurer jumps in.

The good news is that small employers are looking at fairly small increases, with some insurers proposing decreases in their rates, like Aetna by -3.6% and -4.4% for their PPO and HMO plans respectively and United Healthcare by -7.7% and -1.6%. But lets take a closer look at what different insurers are proposing in the individual (often called private) market.

Kaiser, with the bulk of the individual market through Connect for Health Colorado, is still likely the lowest cost option in areas where they offer coverage with a proposed average increase of 13.6%. While that’s higher than the past couple years, it’s important to note that Kaiser likely ended up with a much larger patient population with unanticipated enrollees from the now-defunct Colorado HealthOP. Denver Health is asking for a very modest increase of .08%, but that only pertains to Denver residents with Elevate health insurance plans, and Cigna is proposing a 9.5% increase in their rates.

However, some insurers have asked for some large increases. Rocky Mountain Health Plans has filed for another 34.6% rate increase, potentially a real problem for consumers who have already been struggling with very high health insurance premiums and significant yearly increases. Anthem/Blue Cross Blue Shield has filed for a 26.8% increase, Colorado Choice for a 36.3% increase, and Golden Rule, a subsidiary of United Healthcare, has filed for a whopping 40.6%.

One hopeful development in Colorado’s market is the entry of Bright Health, a new insurer whose rates we will be reviewing to see where they fall in the market. This is helping keep competition in Colorado’s market in some areas, even though Humana and United  –  relatively minor players in private insurance coverage – exited the on-exchange market through Connect for Health Colorado. Another good thing is those individuals that qualify for financial assistance through Connect for Health Colorado will see little impact of these rate changes, as the tax credits will defray the increase in their premiums. 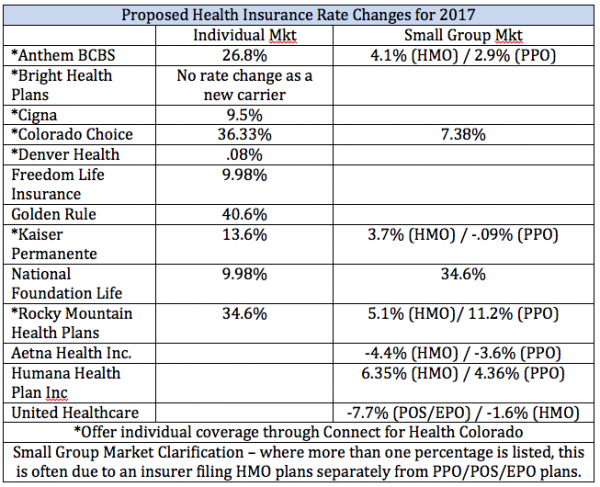 It is important to remember that proposed insurance rates are often higher than the finalized rates, so we do expect some proposed rate increases to be cut back at least somewhat. Insurers have to prove that their proposed increases are justified to the Division of Insurance. However, the proposed increases threaten affordability of coverage overall, especially in some areas of the state where the number of plans and carriers is limited.

CCHI will evaluate some of the more significant rate increases to protect consumers. We believe insurers should be working with providers to improve quality and keep coverage affordable, not just going through the motions of increasing their rates. While the rate review process makes insurance carriers justify rate increases, carriers have to do very little to demonstrate how they are working to contain costs.

Even though there is a period for public comment from consumers and groups like CCHI on the proposed rates, consumers don’t get any notification their rates may be going up until the rates are finalized by the DOI. If you want to get involved and weigh in on proposed insurance rates, CCHI would love to help and work with you (contact us at 303-839-1261 or afox@cohealthinitiative.org).