High-Risk Pools: Been There, Done That

A current hot topic as part of the proposed repeal of the Affordable Care Act is the concept of high-risk pools.  Here in Colorado, we’ve already been down that path and it didn’t work very well for some Coloradans with pre-existing conditions.  While high-risk pool coverage could certainly be life saving for the individual who had it in the pre-ACA world, it shouldn’t even be part of the conversation now as too many people ran into limits on coverage, long waiting periods, or were simply left without coverage.  The fact that high-risk pools are being resurrected in amendments to the American Health Care Act (ACHA) creates a false sense of security for those with pre-existing conditions.  The Center for American Progress estimated that, under the AHCA, the annual funding shortfall for Colorado if we re-created a high-risk pool would be well into the millions – $261 million or more in fact.[1] With this funding shortfall, anyone that knows about our state budget situation knows there is no way Colorado could fund a high-risk pool anywhere near the level that would be needed if protections for pre-existing conditions are waived.

So let’s back up and take a look at what these high-risk pools are, and a little bit of their history.

High-Risk Pool ( /h?/ /risk/ /p??l/ ): “Plans that provide coverage if you have been locked out of the individual insurance market because of a pre-existing condition. Typically, your premium is [higher than what] you would pay for individual coverage if you were healthy.”[2]

Colorado has experience with high-risk pools already. House Bill 90-1305 established CoverColorado, formerly known as CUHIP, or the Colorado Uninsurable Health Plan, in 1990. It began operations in 1991 and closed its doors in 2014 since the ACA protections for people with pre-existing conditions went into effect. In terms of enrollment, the program started with as few as 449 people in 1991 and enrolled a high of 13,833 individuals in 2012 (see Figure 1 for more details). 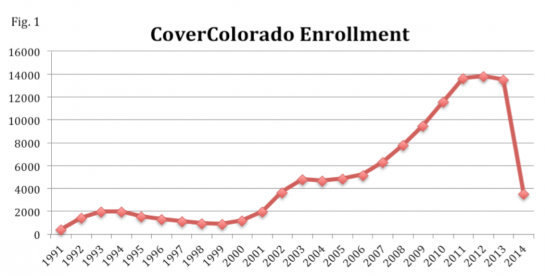 In the beginning, the program was funded through participant premiums and a charge on the income tax returns of residents with gross incomes of $15,000 or over. This charge was repealed in 1993 and the state’s share of the funding then came from money unclaimed by businesses and individuals. Interest from the Unclaimed Property Fund was then added in 2000, and an assessment on insurance carriers whenever there was a projected budget shortfall was added in 2001, and the complex funding system was complete. Fast forward to 2008 when House Bill 08-1390 led to the funding structure depicted in Figure 2 in order to simplify the system. Figure 3 details total funding per year over the 24 years of operation. 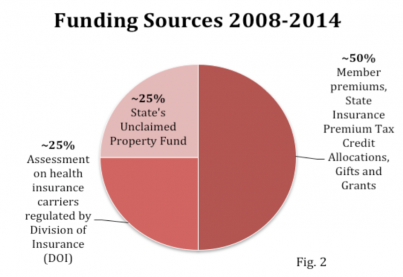 Now in order to qualify for this high-risk pool, there were basic some criteria to be met:

Other criteria included if the person was transferring from another state’s high-risk pool insurance plan, or if their coverage was terminated because their insurer or employer went bankrupt.

But gaining insurance under CoverColorado was not actually so simple. There were barriers involved, such as lifetime limits and waiting periods. Members of Cover Colorado had a lifetime maximum (the maximum amount of money the insurance plan will spend on one’s treatment in their lifetime) of $500,000 from 1990 to 2001, and then $1 million beginning in 2001 thanks to a change in the law. While $1 million may sound like a lot of money, that amount is used up pretty quickly by someone with a chronic disease or condition with costly, regular treatments. In terms of waiting periods, one’s pre-existing condition would not be covered for the first six months of membership if there had been a lapse in coverage beforehand of over 90 days.

The last piece of the puzzle is premiums. According to state statute, participants in the high-risk pool could be charged premiums up to 150% higher than market rate. Deductibles for most of the enrollees were between $1,000 and $5,000 per year, but could go as high as $10,000. Average premiums from 1991 to 2014 were on a general upward trend (see Figure 4), and costs have only increased since then – a trend does not seem to be stopping any time soon.

CoverColorado’s insurance did help some Coloradans who weren’t able to participate in the general market at the time. But, it should be pretty clear why we don’t want to go back to the idea of high-risk pools. We would be losing so many gains in health care since the passage of the ACA. Slashing protections for people with pre-existing conditions and returning them to a health insurance pool that charges them more for limited coverage is unacceptable. CCHI believes in affordable, equitable, and accessible health care for everyone in Colorado and high-risk pools go against all three of those characteristics. We shouldn’t be returning to a system that actively discriminates against and stigmatizes people with pre-existing conditions when we’ve come so far since then.