As a reminder, here is what the ACA did for women’s health:

Health plans HAVE to cover women’s preventive services —including coverage for the full range of contraceptive methods, services and counseling—without any out-of-pocket costs for patients.

An exception was granted to houses of worship that object to contraception. However, religiously objecting non-profits or closely held for-profit companies were NOT exempt. Instead, these employers could opt for an accommodation to avoid moral conflict. Under an accommodation, employers don’t pay for contraceptive services and instead the insurer becomes responsible for covering the costs for their members- so it’s still a guaranteed $0 cost for women seeking preventative care (including birth control).

This was a huge win for women’s health. The Kaiser Family Foundation reported that since the implementation of the ACA consumers are saving an annual $1.4 billion of out-of-pocket spending on the oral contraceptive pill alone, and are spending less out-of-pocket on birth control (see graph below). Additionally, when faced with no-cost sharing, more women are choosing long acting, more effective methods of birth control.

The Bottom Line: Because of the ACA, more women are able to afford to make their own choices in family planning and reproductive health. That means less unintended pregnancies and an overall decreased cost to the US health care system. All good stuff!

So what did Trump’s new rules change? (And why!?)

Let’s break it down:

1) Any nonprofit or closely held for-profit company, as well as any private college or university, with religious OR moral objections are now eligible for a full exemption, instead of just an accommodation. These employees, and their dependents, have no guaranteed contraceptive coverage under the new rules.

2) Any publicly traded companies with religious objections are also exempt from providing contraception coverage for employees and their dependents.

Employers who qualify for exemption can still opt for an accommodation, but now, none have to.

Effective immediately, companies can more easily refuse to cover the cost of birth control. These rules have greatly relaxed the women’s preventative services mandate. There is no concrete definition of ‘moral objection’ to limit the number of employers who could seek exemption. Contraceptive decision making power has shifted from the individual to the employer.

It is hard to predict exactly how many women these rules will affect because it is unknown how many employers who had previously provided coverage under an accommodation will choose to opt for a full exemption. The Department of Human Services estimates that the expanded exemptions will affect 120,000 women nationwide. At an average cost of $584 per user per year, that means $70.1 million dollars could be shifted to women  (Federal Regulation 82 FR 47792 pg 115).

For comparison’s sake: it will cost an employer 54 cents in mailing cost, and approximately two hours of their time to self-certify a religious or moral exemption under the interim rule (Federal Regulation 82 FR 47792 pg 127).

The optimist in me hopes that the fight for widespread birth control access (that has been waging in America since the 1850s!) will not move backwards from its progress. Objecting employers may very well continue to opt for accommodations rather than full exemptions, and the impact here could be relatively small.

But in the past months of volatile health care reform proposals that would dismantle the ACA, and repeated federal threats to Planned Parenthood funding, I have learned to be wary, protective, and to stay consistently looking ahead to what wave might hit next in women’s health.  The federal government has already ended one category of teen pregnancy prevention grants, defunding Colorado Youth Matter and its highly regarded family planning and sexual health education programs.

CPR reported that Colorado exhibtied one of the largest declines in teen birth rates from 2007-2013, because of these very programs. 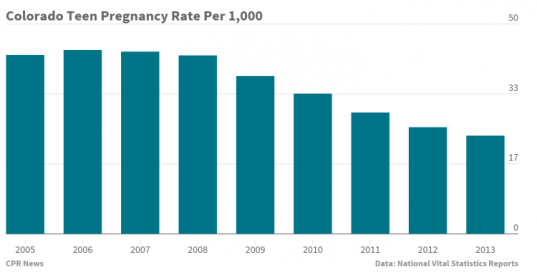 Earlier this year, the administration also changed Title X grants—one of the largest sources of family planning money in Colorado and nationwide—from three-year to one-year grants, with little information about how or when recipients can try to renew their multimillion-dollar awards. This effectively slows the growth and expansion of successful family planning programs nationwide. Read more about the effects of this uncertainty on reproductive health in Colorado here.

Here’s what’s worrying me about the newest regulations specifically:

The justifications for this contraception rollback are buried in hundred page documents; laced with misconceptions, distorted research, and vague terminology. Upon reading the rules themselves, it seems the administration is leaning on dated science and research that doesn’t stand up to scrutiny. In a world full of “Fake News” and “Alternative Facts” I thought I would refute three of my ‘favorite’ arguments made in the new rules, and explain why they are disconcerting.

The rules claim that no current data shows that access to contraception causes decreased incidents of unintended pregnancy, because no current reports show causation data rather than association trends. (This is for good ethical reason-as it would be wrong to provide placebo birth control to test subjects in order to prove birth control prevents unintended pregnancies).

Here in Colorado, our state program, The Colorado Family Planning Initiative, has received nationwide recognition for its success in dramatically reducing the number of unintended pregnancies and abortions in the state by expanding women’s access to the most effective birth control methods. The initiative educates providers and increases access to long-acting reversible contraception (LARC), such as intrauterine devices (IUD’s) and implants. Between 2009 and 2014, both the birth rate and the abortion rate fell a whopping 48% among Colorado women age 15-19 as a result of the program. Read more about the success of The Colorado Family Planning initiative here.

The Trump administration’s newest rules conclude that there is “uncertainty in the relationship between contraceptive access, contraceptive use, and unintended pregnancy.” (Federal Regulation 82 FR 47792 pg 46)

In case Colorado’s recent experiences with expanding access to LARCs isn’t enough, here’s a 2014 report that was published in the New England Journal of Medicine that might help clear things up. After counseling, a cohort of young women in St. Louis were offered the reversible contraception of their choice at no cost-thus eliminating barriers in education, access and cost. Three years later, these women exhibited a significantly lower rate of pregnancy, birth and abortion than the national averages for sexually active teens. Learn more about the CHOICE study here.

The fact is- if used as prescribed- birth control works. And you don’t have to take my word for it- check out the CDC for a deeper look at efficacy.

This 2016 study published in the Journal of Adolescent Health shows that teenage girls in 2012 were just as likely to be sexually active as girls in 2007 but the percentage of sexually active teens using at least one type of birth control the last time they had sex rose from 76% in 2007 to 86% in 2012. Sexual activity isn’t changing, but safe sex practices are.

3. Birth control is bad for your health!

Last but not least, the regulation reads, “hormonal contraceptives have the disadvantage of having many undesirable side effects” (Federal Regulation 82 FR 47792 pg 46). While the side effects of contraception are real, and can definitely be unpleasant, the federal government has set no prior precedent that drugs that have side effects should not be covered-if that was the case zero prescription drugs would be included on your health plan.

Every medical intervention has benefits and risks. The rule emphasizes an association between the oral contraceptive (the pill) and increased risk of of deep vein thrombosis in women, and some types of cancers. The World Health Organization explains: the pill may slightly modify the risk of some cancers, but that there’s an association with an increased risk for some cancers, and a decreased risk for others. It goes both ways. In fact, many women take oral contraception for reasons beyond pregnancy prevention-like prevention of acne, bone thinning and iron deficiency.

These rules fail to mention that there are many types and options for birth control, which can help mitigate negative side effects. Further, the American Food and Drug Administration has approved every type of contraceptive method– which can assure you- they are safe.

Nineteen Senate Democrats have signed on to and introduced legislation this week to protect coverage of birth control with no copay. The legislation would strike these two rules and protect the ACA’s birth control coverage guarantee for women, regardless of who they work for. Four Democrats will introduce similar legislation in the House, but it seems likely Republicans will instead support the rollback rules to protect religious freedoms.

States can act to protect the preventative services mandate in their own statutes by requiring private health plans to offer the same, or improved, coverage with no out-of-pocket costs. In Colorado, state-regulated health insurance plans must cover contraception in the same way as any other sickness or condition, but the state does not currently require a zero cost-share for women’s preventative health services. This means that birth control needs to be covered, but it may cost money, which could prevent women from accessing the contraception that’s right for them.

For now it’s important to spread the word (again) and refute these arguments (again),because the science to back up contraception is clear. Birth control is basic health care, and choosing to use contraception should be a woman’s choice, not her employer’s.

If you have questions about these new regulations or how they may affect your coverage, please contact me at tblei@cohealthinitiative.org