Coming Out in Style

? “I’m coming out
I want the world to know
I got to let it show” ?
Diana Ross

Today is national Coming Out day! And although the famous upbeat song by Diana Ross may not be about coming out as gay, the song is about having pride in who you are. If you do come out today, do it your way! I’ve heard the news in a few different ways from friends. One asked me to fly to the east coast because she needed to tell me something important, another casually told me on a Tuesday night at a dive bar in Colorado Springs, and another just bypassed the conversation entirely and introduced me to her girlfriend. Personally, I’m coming out as a supporter of The Pathway to Marriage today.

In Colorado, 135,000 people have officially “come out.” However, in reality we know this number is greater. If there is anyone to come out to today though, it’s your doctor. Coming out to your doctor can lead to better health outcomes for you. Patients with a LGBT friendly doctor are more likely to seek care, get tested for HIV, or even get a flu shot. 79% of LGBT Coloradans with an LGBT friendly doctor had an annual checkup, in contrast to 49% without an LGBT friendly provider.

Unfortunately, 1 in 3 lower income LGBT individuals is uninsured, without access to affordable care. The LGBT community is not unique in facing financial barriers to accessing care, but also faces an array of social obstacles. Some have been denied services by health care providers and others have been denied coverage because of sexual orientation or gender identity or expression.

Advocates and non-profits are emptying their piggy banks and reaching out to their networks this enrollment season to mitigate the apparent health disparity.

The Out2Enroll campaign is a national initiative to help inform the LGBT community about new coverage options in Obamacare, some of which are already in place, and others will start in 2014. For example, Medicaid is expanding to cover individuals making up to approximately $15,800 annually, and Connect for Health Colorado will allow consumers to shop for a quality and affordable health care plan.

“This isn’t just let’s put a rainbow on it,” says Kellan Baker, associate director for the LGBT Research and Communications Project at the Center for American Progress, who is a partner leading the campaign with the Sellers Dorsey Foundation. The campaign has done their homework, hosting LGBT consumer focus groups. The transgender participants in the groups said they are skeptical of the new plans, and if they will truly meet their health care needs, which include transgender specific health services.

Another reoccurring theme for the focus group participants were concerns about having trouble getting a same sex partner onto their employer’s insurance plan. In Colorado, if an insurance company offers same sex domestic partner health insurance benefits, most committed couples will be able to be covered under the same insurance plan. The definition of “committed” could be legal (marriage or domestic partnership) or another criteria determined by the insurance company. The Out2Enroll campaign plans to use targeted messaging to address skepticism on these two issues in particular.

According to a project conducted by the Center for American Progress, learning that plans cannot discriminate in benefits or costs based on their sexual orientation or gender identity was the biggest motivating factor to seek new insurance options. The top four specific messages that LGBT people need to hear about their coverage options include:

• Plans will cover a range of essential benefits such as doctor visits, hospitalizations, reproductive health, emergency- room care, and prescriptions
• They cannot be denied coverage based on pre-existing conditions
• The may be able to get financial help to pay for a health insurance plan, based on household size and income.
• They may be able to get family coverage that is inclusive of same-sex partners

The Out2Enroll campaign is a creative and useful way to ease the concerns and to help in educating Colorado’s LGBT community on how they will benefit from Obamacare, as others will. We are excited that in Colorado, Obamacare can help 26,000 or more LGBT Coloradans come Out2Enroll to get the care they need when they need it. 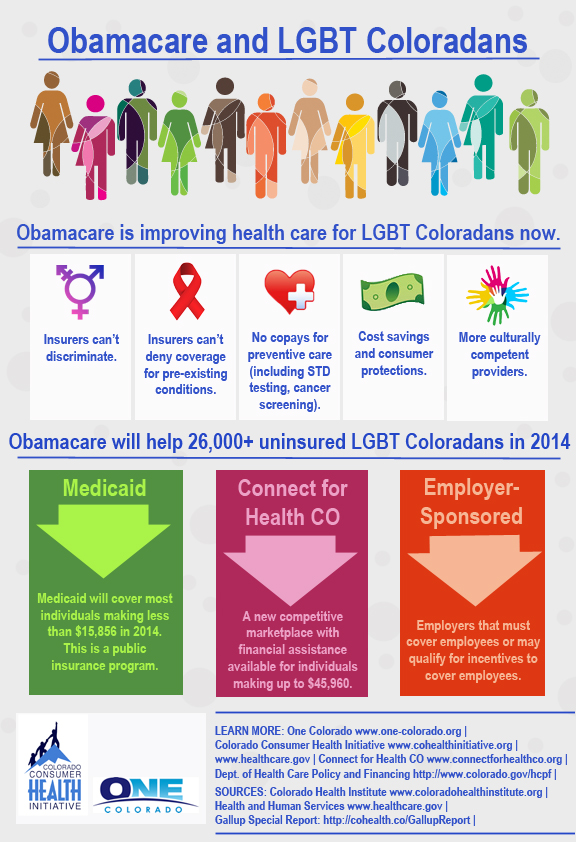