An Extra 'H' Changes A Lot: How the AHCA Can Affect Colorado, With a Spotlight on Rural Counties

Popular things in the ‘10s: Veganism, virtual reality, and…stripping millions of people of their health care?

One of these things is not like the others. 2017 brought us the American Health Care Act (AHCA), a fad that unfortunately will have much longer lasting effects than the rest of these on the list (trucker hats were pretty bad though). The AHCA was introduced to the House of Representatives and passed on May 4th with a vote of 217 – 213. The bill changes things like the Medicaid funding structure, tax credits for private insurance, protections for people with pre-existing conditions, and gives a big tax cut to millionaires, and according to the Congressional Budget Office (CBO) this bill would cost 23 million people their health care if it becomes law. For more detail on which elements of the Affordable Care Act (ACA) stay or go, check out our brief.

While the effects of the AHCA could be detrimental to people all over the country, it will affect different states in different ways. What we’ve set out to do here is show Coloradans how it could impact your lives, and the lives of those around you – especially rural Coloradans.

Almost 600,000 Coloradans gained coverage as a result of the ACA – the current proposal would have disastrous impacts on both Medicaid and private health insurance coverage for these people. Some key components of the AHCA are:

Kaiser Family Foundation estimated that, pre-ACA, 22% of non-elderly Colorado adults, or 753,000 individuals, had a pre-existing condition. In the past, pre-existing conditions have included rheumatoid arthritis, heart disease, and diabetes. Under this proposed plan, states could waive the community rating provision, therefore allowing insurers to charge sicker people higher premiums.

The AHCA would also move Colorado backwards from the huge gains we’ve made in reducing the number of people without insurance. Currently we have an uninsured rate of 6.7% – under this new health care system that is bound to skyrocket back to numbers we haven’t seen in years.

Colorado has 17 urban counties, 24 rural counties, and 23 frontier counties (see Figure 1), based on the Colorado Rural Health Center 2014 county designations. These rural and frontier counties have the potential to be disproportionately affected by the implementation of the AHCA – many already have few choices of carriers or expensive health premiums,. Medicaid covers 182,000 individuals in rural Colorado, or approximately 26% of the rural population. According to a recent Center on Budget and Policy Priorities (CBPP) report, roughly 21% of Coloradans who have gained coverage as a result of Medicaid expansion live in rural communities. 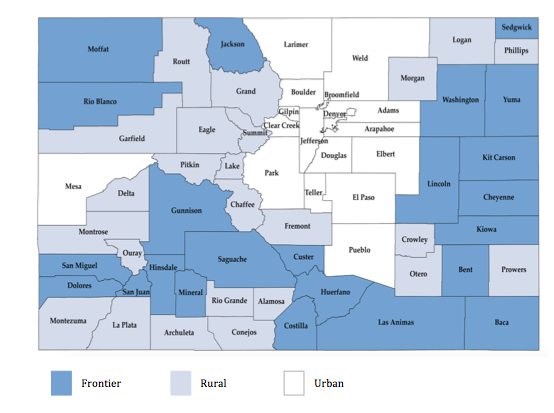 We looked at 4 different areas of the state (so far!) – Northeast Colorado, Southeast Colorado, San Luis Valley, and Pueblo County – to get a snapshot of the health care landscape and what may be to come.

In Phillips County, 30.5% of the population has arthritis; 11.14% of Washington County has heart disease; and 10.5% of Logan County’s population has diabetes, and therefore rely on guaranteed access to coverage and the community ratings protections for their health conditions.

Private insurance enrollment through the marketplace ranges from 1.7% in Morgan County to 4.8% in Yuma County. Those on private insurance could experience anything from a modest decline of a $47.00 lower monthly premium for a 45-year-old receiving tax credits to a $721.75 monthly increase for a 60-year-old under 150% FPL (less than $18,000/year).

In Huerfano County, 41.9% of the population has arthritis; 12.7% of Bent County has heart disease; and 21.2% of Prowers County’s population has diabetes.

Medicaid covers approximately 39.4% of the population.  On a county specific basis, Medicaid enrollment ranges from 26.8% in Crowley County to 44.1% in Huerfano County.

In Costilla County, 41.0% of the population has arthritis; 3.1% of Rio Grande County has heart disease, and 18.4% of Saguache County’s population has diabetes.

Medicaid covers approximately 45% of the population.  On a county specific basis, Medicaid enrollment ranges from 42.6% in Rio Grande County to a whopping 56.2% in Costilla County.

Private insurance enrollment ranges from 2.0% in Alamosa County to 3.8% in Saguache County. Those on private insurance could experience the same changes in premiums as people who live in the Northeast corner of Colorado.

Changes to Health Care and the Colorado Economy

Colorado’s economy has its ups and downs – literally – but the changes proposed at the federal level would be like attaching an anchor to a rubber ducky. Aside from affecting Coloradans’ personal finances by driving up premium prices and cutting Medicaid benefits, it would impact the workforce, large health systems, and small businesses, to name a few.

When we look at a rural area like Northeast Colorado, we see the real implications of a repeal of the Affordable Care Act. Health and wellness is the 3rd key employment industry in the area, providing 3,200 jobs. There are 3 hospitals, 6 critical access facilities, and 140 health and wellness establishments that contribute to this job count. In Northeast Colorado alone, a financial model by the Colorado Fiscal Institute that looks at a full (and immediate) repeal of the ACA predicts a loss of 277 jobs, over $10 million in wages, over $12 million in GDP, and over $14 million in production. That’s huge.

Colorado, and the rest of the country, will suffer if the American Health Care Act passes through Congress. Not only will consumers be at risk for higher premiums, denials based on pre-existing conditions, and a loss of public coverage, the state’s economy and workforce would be slashed. We’re calling on you to take action:

The introduction of the Senate’s version of the AHCA, and a vote on this bill, is expected to happen during the week of June 26th, so this destructive action is on the fast track. We’re counting on consumers and advocates around the country to help us stop it.