You get a tax subsidy! You get Medicaid! … But some Americans get nothing?

Obamacare comes with financial assistance to help many Americans afford health insurance. And it was sorely needed. Before Obamacare was passed in 2009, 50 million Americans went without insurance, often because they could not afford it. A family premium in Colorado in 2009 cost $13, 360—nearly $4,000 more expensive than just six years earlier.

These tax credits are based on a sliding scale so that American below 400% of FPL will pay no more than 9.5% of their income for health insurance. 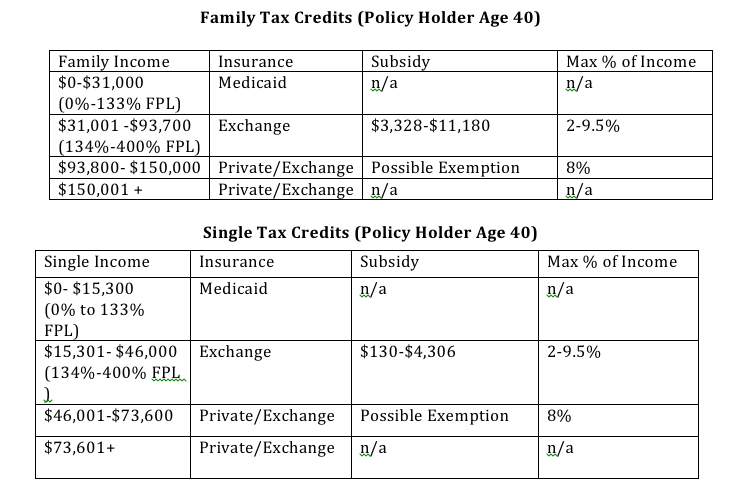 However, despite all of the new resources for affording health insurance coverage, there could still be millions of Americans who will struggle to afford health insurance.

The new Medicaid expansion for 100%-133% FPL will be implemented by states. However, the Supreme Court decision on Obamacare limited the federal governments ability to take away states funding for other Medicaid programs if they choose not to expand. So if a state does not expand their Medicaid eligibility, Americans under 100% of the FPL ($11,170 for an individual, $23,050 for a family of 4) will not have access to any financial assistance or public insurance options.  More than likely this entire population will be exempt from Obamacare’s requirement that all Americans have health insurance because they cannot afford it. Colorado has not yet decided whether or not they will pursue the Medicaid expansion.

Another area of concern is Americans who earn over 400% of federal poverty line who are uninsured.  For people above 400% FPL, they are exempt from being required to purchase health insurance if it would cost more than 8% of their income. However, going without health insurance is not a very attractive option for many in this income range. For example, Americans who are close to the age of 65 don’t qualify for Medicare and if they make more than 400% FPL they would be left paying the full costs of private insurance. It is estimated that a 60 year old making $50,000 a year would have an annual health care premium of approximately $10,000, 20% of their income!

You should be able to count on access to affordable health insurance. The expansion of Medicaid and the creation of Colorado’s health benefit Exchange are excellent first steps in helping Coloradans get the care that they need when they need it.

To find out whether you and your family qualify for a federal tax subsidy or Medicaid check out the Kaiser Foundation’s Health Reform Subsidy Calculator.