This summer, the Colorado Business Group on Health and the Colorado Consumer Health Initiative released the Colorado Hospital Value report. The report looks at the costs of various procedures from around the state to compare the price per hospital. The goal of the report is to provide consumers with data so that they can be informed purchasers.

“Quality variation is wide and ubiquitous – across, as well as, within virtually any given hospital in Colorado. And prices – even after adjustments for patient acuity, the local cost of living, labor mix, amount of uncompensated care, and several other factors – vary wildly,” the report explains in outlining the reason for the report.

The report uses data from a recent Colorado Consumer Health Initiative & Altarum Value Hub poll, and a RAND Pricing Transparency Study as the baseline for the report. The CCHI study found that 66% of Coloradans are worried about getting low quality health care and that 25% believe that the cost of care equates the quality of service. The RAND study found that prices paid to hospitals not only vary widely by state, but by individual market as well.

Authors of the report use this data to give an individual hospital a composite score and then compare the prices at that hospital to the average price of a procedure statewide.  The scores are based on clinical quality, patient safety and performance of virtually all acute care hospitals and health systems throughout the U.S. at the individual clinical service line level. 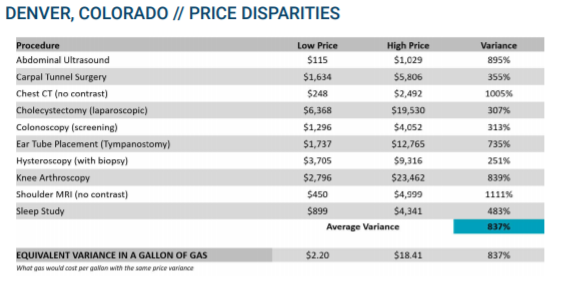 “As the nation’s, its employers’, and our families’ healthcare spending continues to grow faster than the general rate of inflation and as hospital prices grow faster than their costs, the need for transparent pricing and quality data – data that can be benchmarked and referenced – is essential if the health care market is to function like others. Currently it does not,” the report states.

The report finds that across the nation hospitals that treated patients with private insurance were paid 2.4 times the Medicare rates in 2017. According to the RAND study, Colorado ranked 6th of 25 for the most expensive hospitals in the nation.

Data in the report shows that overall scores do not necessarily mean a higher quality of care. For example, hospitals in Colorado Springs have some of the highest overall scores, but some of the lowest in specific areas of care. The report also found that independently run hospitals average payments relative to Medicare rates are generally lower when compared to health systems’ hospitals.

And, in terms of value, the report concludes that the price of the service does not always correlate with the quality of care.

In response to the report, Colorado Hospital Association released a statement saying, in part:

“A hospital may perform well on one report card and poorly on another. Even within this report, hospitals may perform well overall while scoring poorly in one service category. Consumers are encouraged to seek additional information for the specific service they need.”

The report is part of an ongoing conversation on high hospital costs in the state.